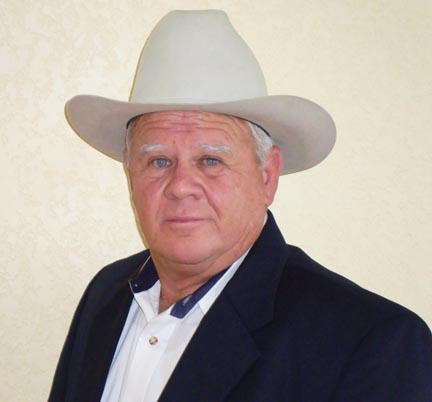 Jim Monaghan’s dance with the American Red Brangus Association began in the mid 1980s. As a member he supported the association, attended meetings, sales and was there to lend a hand anytime someone needed him. At one of his first sales he sat next to Ms. Laura Hastedt. He purchased a bull. He loves bulls. Ms. Hastedt told him he needed cows before he bought a bull, but the bull was the first member
of his American Red Brangus herd. Oh by the way, he came to the sale in a car. He didn’t even own a cattle trailer. Jimmy Brister and James Puerta took the bull to their ranch until Jim could pick him up.

Jim continued to build his herd. At first he wanted lots of cows, but soon realized quality was much more important than quantity. Jim worked very hard on building a quality herd.

There are two things Jim loves, his cows and kids. What a perfect combination. He started raising show heifers and over the years he has been very successful raising a number of Grand Champions. There were numerous times he helped a junior member by letting them show an animal and helping with feed bills. He told every child he sold an animal to “If you get tired of showing I will buy your heifer back as long as she is healthy,” no questions asked.

Jim served on numerous committees, put sales and field days together, helped with the heifer futurities, cooked for parties and meetings, served as a member and officer in a number of the satellite organizations and he served as the association president in 2004. He also served a vital part in the construction of the American Red Brangus Office in Dripping Springs, donating his electric knowledge and labor.

Jim was always promoting our breed, volunteering to take the booth to the Houston Livestock Show, San Antonio Livestock Show, TSCRA Annual Convention, Florida
Cattlemen’s Convention, NCBA in Nashville, Tennessee, and numerous other states, all at his own expense.

In 2007 the board of directors decided to hire Jim, on an as needed basis, to be our executive director. Jim really stepped up the promotion of the breed. He served as a director on the Texas Beef Council, president and director of the Purebred
Cattle Alliance, director and vice president of the American Breeds Coalition, committee member on the San Antonio Livestock Show International Committee and director and president of the Independent Cattlemen’s Association. With Jim
serving in these organizations, American Red Brangus had a voice in the cattle industry. Jim made sure everyone knew about American Red Brangus and how good the cattle and the association are. He traveled thousands of miles promoting the
breed and did an excellent job.

At the Annual Meeting in November, Jim retired. The association would like to say thank you for a job well done. We appreciate all you have done for the breed and
the association.

Put in your email address to receive newsletters and special offers from American Red Brangus!