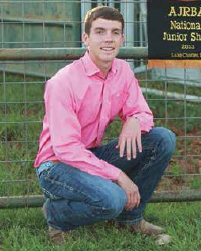 Dylan Bostick currently is a South Plains College student originally from Bangs, Texas, and previously active in the Bangs FFA and former Vice President of the American Junior Red Brangus Association (AJRBA). In addition to maintaining a 4.0 grade point average at South Plains, he also participates on the Livestock Judging Team, is a member of the Phi Theta Kappa College honor society and a campus ambassador.

Dylan has a real passion for showing Red Brangus cattle, which has spilled over in to a love for all animals. He has expressed interest in attending Texas A&M University and becoming a Veterinarian. Beginning in eighth grade, Dylan started showing and has been very blessed with his winnings; which he is very proud, and rightly so. Showing Red Brangus cattle is something that will be in Dylan’s blood forever and now he is passing on that tradition to other junior exhibitors. Other juniors whom he has mentored, are currently showing several of Dylan’s animals. In previous years, Dylan has raised and shown the Grand Champion Bull and Grand Champion Female. This year, he raised and sold the 2016 AJRBA National Show Grand Champion Female, Bostick’s Ruby 45C.

Recently, Dylan received his auctioneer training from the Missouri Auction School. The AJRBA would like to thank Dylan for stepping up to the plate as our auctioneer at the 2016 AJRBA National Show Banquet. He was instrumental in selling more than $8,000 in live auction items, which all go towards the future of the AJRBA program and junior show.

Put in your email address to receive newsletters and special offers from American Red Brangus!